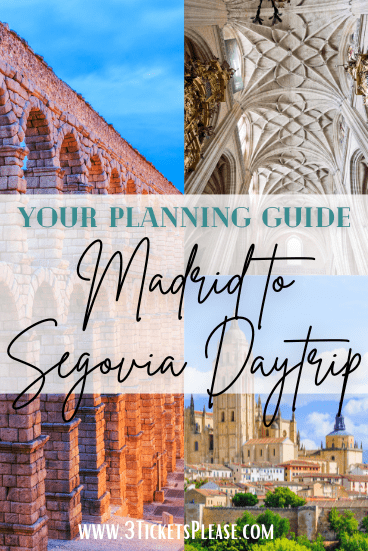 One of the benefits of staying in centrally located Madrid when visiting Spain is the opportunity to day trip. And one of our favorites is the Madrid to Segovia day trip. With its Roman aqueducts and stunning Alcázar, Segovia is the perfect day away from the hustle and bustle of Madrid. And is on our list of must see places in Spain.

Your Planning Guide for a Madrid to Segovia Day Trip

Our Madrid to Segovia day trip planning guide includes how to get to Segovia from Madrid, how much time to plan in Segovia, and things to do in the magical town that is Segovia.

How to Get to Segovia from Madrid

Regardless of whether you go by bus or train, it will take you about an hour from Madrid.

Trains to Segovia leave from Charmartin station and run hourly. If you are like us and are staying in central Madrid near Atocha station, be aware that Charmartin is about a 40 minute metro ride away. We did not plan our time well and missed the first train. The train cost about 22€.

Once you arrive at Segovia’s train station, you will need to grab a city bus into the town. The ride is a couple of miles and takes about 15-20 minutes.

You’ll take the 11 bus to get into town. They time the buses so that they are literally waiting outside the train station to take you into town. So don’t stress, it works really well. And the cost is around €2 per person.

Or you can take a bus directly from Moncloa station in Madrid. The bus ride is slower taking about 1.5 hours, but takes you more directly into town in Segovia.

You can grab a ticket from the Avanza ticket office in Moncloa station. Or if you prefer to buy in advance, like we do, you can buy online.

While the train is the most popular, the bus is definitely the cheapest plan for your Madrid to Segovia day trip. The bus costs around 9€.

You can also get a tour that takes you to both Toledo and Segovia. The tours are full day experiences that cost around $50 per person. The tour pick up is in central Madrid. And they offer private van transfers and a guide.

And of course, you can drive yourself. While driving does add the convenience of continuing on to Ávila, it is our least recommended mode. Spain has done a beautiful job making a Madrid to Segovia day trip possible by train or bus. And public transit is more sustainable and economical.

We also discourage you from driving because parking in Segovia is limited and expensive. When we lived in Spain in 2010, we drove to Segovia. And even now over a decade later, I can remember the struggle to find parking.

And while it made some sense for us as we were coming from Alicante, Spain, those day tripping from Madrid to Segovia really have no reason  not to go by public transit or tour.

Any Madrid itinerary should include a day trip to Segovia. The charming medieval small city is just an hour away and full of things to see and do.

Adding in travel time, you’ll need 5-6 hours for your Madrid to Segovia Day Trip. Two hours of travel and roughly 3-4 hours to explore the city.

If you are just hitting the big 3, you’ll need the following time at each of the sites:

30 minutes at the Aqueducts

30  minutes at the Cathedral

1.5-2 hours at the Alcazar, including climbing the tower

1 hour walking between the sites and exploring the Jewish quarter

If you want to walk down to the Mirador to get a beautiful view of the Alcazar, you should add another 45 minutes to the trip.

Things  to do in Segovia, Spain

On your Madrid to Segovia day trip, you are going to want to see Segovia’s big three attractions. And while most day trippers concentrate on the big 3 of Segovia, we have added a few other sites and ideas.

Because it is truly the combination of Segovia’s architectural wonders along with the smaller sites and time wandering Segovia’s cobblestone streets that makes a day in Segovia so wonderful.

It is actually impossible to come to Segovia and miss the aqueducts. Both the bus from the train station and the inter-city bus from Madrid drop you at the feet of this architectural marvel.

Built in 50 BCE, these aqueducts solved the important problem of transporting water 11 miles from the Rio Frío to the Roman castrum, or camp. The castrum became a Muslim fortress, which in the 13th century became the Alacazar of Segovia.

The Aqueducts, known as El Puente or bridge, consists of 167 arches, making it one of the best preserved Roman aqueducts in the world.

And its height is pretty remarkable. The stone structure rises 30 feet in the air constructed of stone placed together with little to no mortar. Water still runs over the aqueducts and under the city.

While you can’t see the water now, you can trace the path through the main street of the city, through the Plaza Mayor and to the Alcazar. The water’s path is indicated with bronze markers set into the cobblestones.

We definitely recommend taking the stairs at Postigo del Consuelo, which are found between the tourist office and the aqueducts. The stairs lead not only to great views, but also where you can find signage and information about tracing the water.

If you are like us and traveling on a budget, there is no greater place to have a picnic than at the top of the stars at Postigo del Consuelo. The views of the aqueducts are remarkable, which you can enjoy atop a ledge of the city’s former wall. Breathtaking.

The Cathedral of Segovia was the last Gothic cathedral built in all of Spain. And because of its lateness, the style of the Cathedral is quite interesting

Inside the Cathedral, there are 21 chapels, each decorated in a unique style. It is not expensive to go inside: just 3€.

However, even if you decide not to go inside, there is no way to miss this grand structure. Situated in Plaza Mayor, the Cathedral is at the highest point in the city. And its construction and placement means it towers over the town.

While it is beautiful anytime, at night it is illuminated, which makes it extra special.

First a Roman castrum or fort, next a Muslim wooden fortress, and finally, a medieval castle, the Alcázar of Segovia is worth the trip from Madrid to Segovia all on its own.

The medieval castle is built into a rocky crag at the Western most part of the town. Rising out of the rock and overlooking the countryside, the Alcázar is truly a thing of dreams. Some even conjecture that it was one of the castles that inspired Disney.

And its beauty and strategic position meant the Alcazar was home to many monarchs. The castle still houses the thrones of Isabella and Ferdinand.

Tickets are purchased at the building just to the left of the Alcazar. You can also purchase them in advance online. Basic entry is just 6€.

However, we definitely recommend that you add the tower to your ticket. The tower, called the Torre de Juan II, is an additional 3€. But the views are totally worth it.

However, be aware that the tower is 152 steps so if you have little ones or those with limited mobility, you may need to reconsider this add-on.

The ancient walls of Segovia, or Murallas de Segovia in Spanish, once encircled the entire city of Segovia. Today, Segovia has about 3.5 kms left of their ancient walls.

And while you can see the remnants of the walls through the city, the most common place to experience them is just outside of the Alcazar, near the Puerta de San Andres.

Exiting the gates of the Alcazar head right to walk alongside the walls for a great view of the castle and the surrounding countryside.

If photography is your thing, we definitely recommend heading into the meadow below the Alcazar to get a great photo of the castle. This viewing spot is on the grounds of San Marcos. The meadow is viewable as you look out of the grounds and the walk takes about 15 minutes.

The meadow is next to the Erasmus River, making this a beautiful place to not only take in the view of the Alcazar but also nature. We spent an entire afternoon here when O was a toddler, chasing ducks and skipping stones.

The building is known for its facade of 617 granite triangles or peaks – literally the house is called the house of peaks. Built in the 15th century, legend has it that the peaks were adhered to the house as some form of defense.

The Casa de los Picos is not a place to go in, but rather a place to walk by. And of course, take an iconic photograph.

The building now houses Segovia School of Art and Superior design. And is not open to tourists. The house is located on Calle de Juan Bravo.

Segovia had one of the largest Jewish communities in the kingdom of Castille. The first recorded documentation of the Jewish community in Segovia was in the 13th century. Although it is believed that the community began growing in the 11th century.

However, as a part of the Spanish inquisition,the Jewish community was confined within seven gates. The Jewish quarter is located behind the cathedral and ends at the arch of San Andres.

Walk Calle Mayor, the main thoroughfare through the Jewish quarter, and you get a clear understanding of the history of this thriving community.

What to Eat in Segovia

While where to eat is up for discussion, what to eat is clear. If you are a meat eater, then the traditional plate of suckling pig or Cochinillo de Segovia should be on your list. But only if you can handle the presentation of your dinner still having its head.

Sucking pig is a traditional dish throughout the regions of both Castile and León and Castilla-La Mancha, the region where Toledo is located. However, many argue that the sucking pig of Segovia is the best in all of Spain due to the way it is brined.

While there are several restaurants that serve this traditional dish, the most highly recommended are Meson de Cándido and Restaurante José Maria.

Is Segovia the Best Day Trip from Madrid?

Well it depends on who you ask. Segovia is Faith’s favorite day trip from Madrid. O prefers Toledo and Matthew El Escorial.

But even though not it wasn’t #1 for O and Matthew, they were both grateful to see the city. Both were especially impressed by the Aqueducts. They are truly a historic and architectural feat. Once you see them for yourself, you’ll immediately understand why Segovia was added as a UNESCO World Heritage.

Is A One Day Madrid to Segovia Day Trip Enough Time?

Yes. While Segovia is certainly enchanting in its own right, you can definitely explore and experience the city as a day trip.

However, if you can stay over, the lighting on the Cathedral and Alcazar gives the city a magical feeling.

What part of Spain is Segovia in?

Is there a high speed train from Madrid to Segovia?

However, note that while the train is the fastest route, traveling by bus is cheaper. Segovia’s train station is also located 6 km out of town. So you will want to take the local bus, #11, to reach the old town.

This site uses Akismet to reduce spam. Learn how your comment data is processed.