Visit Alaska Without A Car: Your Complete 10-Day Itinerary 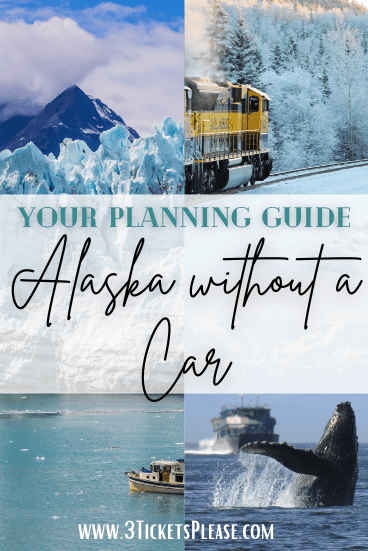 We travel by public transit in Europe so why not, Alaska. While this large geographic expanse does not seem feasible to experience on public transit, you can absolutely visit Alaska without a car.

Let us show you how.

Some of the links in this blog are affiliate links. If you click and purchase, we will receive a commission at no extra charge to you.  We only recommend activities or places we have experienced, and all opinions are our own.

How to Visit Alaska Without a Car

Any trip to Alaska without a car is going to involve using either Alaska Railroad or one of the private bus companies that operates in the state.

Alaska Railroad was definitely our favorite way to travel. The railroad serves10 destinations in Alaska, but those most visited by tourist are:

You can do the entire itinerary from Fairbanks to Seward using rails alone. And with good reason, riding the Alaska Railroad allows you to see some of the most scenic views the United States has to offer. And all without the stress of driving yourself.

Alaska Railroad also offers complete packages both in the summer and winter. These packages include rail travel, activities and accommodations. The packages range in number of dates from 11 days to 5 days.

And from more elaborate and lengthy trips like “Alaska by Daylight” that cost around $3,500 per person. To simpler trips literally called “Just the Basics,” a 5-day trip for $1,500.

Of course, if you are on a budget, you can build your own itinerary using Alaska Railroad for much cheaper. One important way to save money on Alaska Railroad is to choose “Adventure” over “Gold Star” Class.

“Gold Star” is typically twice the cost. And while it does have the benefit of an on-board meal and priority boarding, it isn’t worth the cost for these budget travelers.

However, if you are traveling on a budget or your plans don’t line up with the railroad schedule, you may choose to use one of the private bus companies that runs between these designations. The best of these bus services is the Alaska Park Connection Motorcoach.

Alaska Without a Car: Our 10 Day Itinerary

We utilize public transit as one of our strategies for budget family travel. So we tried it out and YES, you can visit Alaska without a car.

When we first started planning, we never planned to go to Fairbanks. However, when there were no cars available, we knew we had to go by public and private transportation. So the train it was.

And the best way to make the dates work and to tick off our “must see” boxes of Denali and Seward was this itinerary:

Day 1 of our Alaska 10 day itinerary started in Fairbanks. Most summer trips to Alaska do not necessarily include Fairbanks. Fall and winter is the city’s high season as one of the best places in the world to view the Northern Lights.

And honestly if we did the trip again we are not sure if we would return to the “Land of the Midnight Sun.” However, the city of Fairbanks itself is not entirely to be dismissed. The majority of streets include a bike lane so the city is easily traversed by bike.

We even rode our bikes out to the Large Animal Research Station. If bike is too much you can get there on the campus bus.

A part of the University of Fairbanks, the Research Station has a wonderful tour that cost $15 per person. Children under 5 are free. The 45-minute tour will teach you every thing you never thought you needed to know about Muskox and Caribou.

The city is also rich with history. Pioneer Park shows the city of Fairbanks as it was 100 years ago. It is also a great place to have a picnic or grab some ice cream.

However, our favorite experience in Fairbanks was definitely UAF’s Museum of the North. Tickets are $16 for those aged 13+ and $9 for youth. We spent the majority of our time in the special exhibit, Perspective: Ways to See A Whale. In this exhibit you could hear the song and touch the bones of the great Bowhead whale.

After two nights in Fairbanks, our 10 day Alaska itinerary pushed us into the wild. On day 3, it was time to catch our first train to Denali. At just under 4 hours, the train ride is an easy morning trip into Denali.

However, the train is actually 8 hours from Anchorage to Denali. You could cut the travel time in half if you travelled by car from Fairbanks to Denali.

But the last hour of the trip through the Nenana River Gorge, with its hairpin turns and curves and gorgeous scenery, made the extra time totally worth it. And at $85 per person on Adventure class, a ride of the train is both relaxing and affordable.

Do You Need a Car in Denali?

Of all the places we went, Denali is the only one where we missed a car. It does seem a bit ironic to miss having your own wheels in nature, but it is because of the remoteness that made being carless challenging.

When we arrived at our hotel, Denali Park Village, we were starving. Far from the few grocery shops and few restaurants in “town” (which is in essence 15 businesses), we had to take the hotel shuttle to find any eats.

At Denali Park Village there is a restaurant on property but due to Covid-related staffing shortage, it was closed when we arrived. Not having our own mode of transit, meant we were in “town” for about 3 hours waiting for the shuttle to return.

But in the end, we took the shuttle, ate from a taco truck with our grocery store wine, beer, and Sprite and were fine.

Any reservations we had about Denali the first day were eased the next on the Tundra Wilderness Tour through the park. The 8-hour tour is the best way to see the park.

If you do drive a car into Denali, you will only be able to drive to mile 15. All the good stuff, which for us included seeing grizzly bears, fox, ram, caribou and moose, was deeper into the park.

So definitely book the tour!

With only one full day in the area, the Tundra Wilderness Tour, with its knowledgeable driver and guide, allowed us to feel like we had “done” Denali and had no regrets when leaving the next day.

Although a long day, the Tundra Wilderness Tour was one of our favorite things we experienced in Alaska. If I returned to the area, I would do it again.

Seward is not to be missed on any tour of Alaska. Located just over two hours South of Anchorage, this port town is a visual feast for the eyes. Even if you can’t or don’t want to ride the train around Alaska, we absolutely recommend taking it from Anchorage to Seward. The views are absolutely spectacular. And unlike traveling by car, the train goes between mountains and past glaciers.

In Seward, we had our second favorite activity, the Kenai Fjord National Park Glacier and Wildlife Tour. On this 6 hour tour, we saw not one, not two, but three different types of whales: humpbacks, orcas, and fin whales. And while the wildlife was magical, there is also something both serene and majestic to standing before a 1-mile wide glacier as it calves into the bay.

The tour is spendy at $223.00. As budget travelers any activity over $100 has to be a must see for all three of us . The Kenai Fjord tour was definitely that and more. It is absolutely not to be missed.

On our second full day in Seward, we opted for a few hours with the Seavey Ididaride Racing Team. The dry land mushing experience was great fun, but nothing compared with snuggling the newest batch of future Iditarod race dogs. We also spent a few hours at the Alaska Sealife Center, which is a nice place to spend a few hours, especially if you are traveling with kids.

While not particularly known for its bike riding, we have put Anchorage on our list as one of the top cities to bike. The Tony Knowles Coastal Trail is 11-miles of fairly flat and always scenic bike way. We spent an entire day just biking up and down the coastal trail and the miles of trails that connect the coast to the rest of the city.

On on our second day, we rode out to the Lake Hood Float Plane Base, the largest and busiest float plane base in the world.

Because we were traveling by bike, instead of taking the Trolley tour, we brought a lunch and spent a full hour, up close and personal watching float planes take off and land. While taking a float plane ourselves was not in the budget, our time at the base definitely made us feel like we were vicariously experiencing this unique Alaska experience.

In the end, we were so grateful that we didn’t just grab a car in Anchorage. Traveling by train, bus and bike helped us learn so much more about the 49th state. And not having a car, forced us to create a unique Alaskan 10 day itinerary.

Even the long bus day from Denali to Seward had super knowledgeable drivers who gave us great local information and tips. And Matthew, our primary driver, was thrilled to kick back, have a beer and watch the glaciers go on by all from the comfort of our train seats.

Know Before You Go: Travelling exclusively by train and bus in Alaska ain’t cheap. In the end, to move the three us around Alaska was well over $1,000. However, it is worth noting that even if you can get a car, the daily rate in the summer is $100-$150 per day so our way of traveling was a financial wash.

But the ease and relaxation in letting someone else handle the driving made it, in our opinion, the far superior way to see the state. If you have it in the budget, you can travel on the railroad in the Goldstar Dome Service, but at roughly twice the cost, this was not an option for our family.

Frequently Asked Questions About How to Visit Alaska Without a Car

How can I travel Alaska without a car?

Trains are the perfect way to get between Alaska’s cities and towns. And the Park Connection Motorcoach will take you from Denali to Seward in a single day. While in Fairbanks and Anchorage, bikes are a excellent way to explore in the summer.

Can I tour Alaska on my own?

Absolutely. It is easy to build an itinerary to explore Alaska. Or use ours that goes from Fairbanks to Seward without a car.

How many days is enough to see Alaska?

Alaska is the biggest state in the United States. So if you want to see a good portion of it, you will need at least a week.
We felt 10-days was a good amount of time to travel from Fairbanks to Seward with time in Denali and Anchorage.

In addition to Alaska, we’ve traveled Italy and Scotland using only public transit. However, if you are looking for another place to experience nature’s rugged beauty we can not recommend Snowdonia National Park in Wales. And of course, we also traveled that part of the world by public transit.

This site uses Akismet to reduce spam. Learn how your comment data is processed.